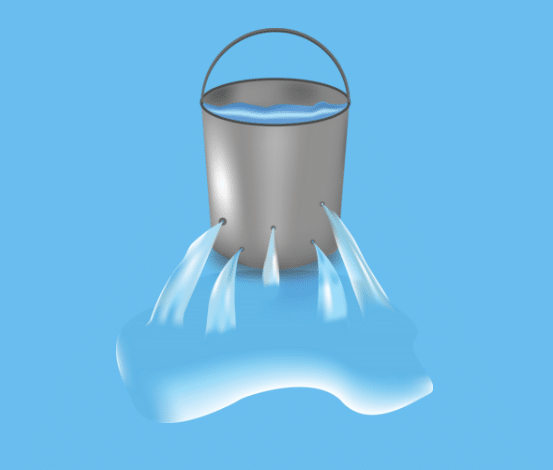 Topic leakage is a frequent and frustrating characteristic of many meetings. And it is more difficult to control when you are video conferencing.

Topic leakage occurs when a group is discussing one topic and is deflected onto another. It is a common cause of ineffective meetings and immense frustration for those attending. If everyone in a meeting is aware of this phenomenon, they will be better able to identify its occurrence and prevent it derailing the process of the meeting.

A brainstorming session is a good example in which topic leakage frequently occurs. This is best undertaken in two separate stages: idea generation then idea evaluation.

The first stage of a brainstorming session is creativity and the generation of ideas. It is free and loose – it should fly. The process should encourage imagination and inventiveness. Criticism and disagreement are separate activities and should be postponed until the next stage.

Creative thinkers should be encouraged to contribute and supported when they do so. One characteristic of a creative person is that they see things that others do not, so the temptation is immediately to dismiss their ideas as impractical and half baked. Plus, those who make leaps in their thinking can see their idea will work but can’t articulate the steps that connect the problem with the solution. When criticised, they tend to opt out, dismissing their critics as stupid because they don’t understand.

Having generated a raft of ideas, the second and separate stage, is to apply critical thinking. This is when what has been proposed is subjected to analysis and practicalities.

On one occasion, I undertook a coaching session with a young executive who management felt was underperforming. He was frustrated at his quiet behaviour and lack of impact. His profile revealed that he had both high creativity and high critical thinking ability. What he had been doing through school, university and now at work, was to come up with ideas and immediately shoot them down without verbalising them. It was an immense relief to him to understand this. One action we agreed was that he would share this insight with colleagues to allow him first airtime to create and then separate space to analyse.

When undertaking a problem analysis exercise, you often encounter a form of topic leakage called premature evaluation or the wolf in sheep’s clothing. Frequent examples are “The problem is lack of training” or “We need more training” or “Poor teamwork.” These are not problem statements but solutions.

If these ideas are not challenged you will end up with a pile of woolly problems called “training” and “team building” when, it is most likely, there are a number of specific and substantial root causes to the difficulties with the current situation which will not be addressed by this sloppy thinking..

It is the “root cause” that the meeting should first be analysing. Don’t allow suggestions for action and solutions until all the issues and their origin have been identified.

Sometimes you will have in a meeting a person with an individual issue – maybe a specialist in a particular topic – security, quality, finance. They may not be as committed to the team and the overall aim of the session as much as the others because they want to push a specific perspective. This person may see everything from the viewpoint of their technical expertise. Or, they might want to influence the session towards a certain outcome that is favourable to them or unfavourable to others.

The final manifestation of topic leak I have encountered is topic leap – a more energetic form of topic leak. This is when an individual leaps from the topic under discussion to a totally unconnected topic, a point of view not in any way related to the objective or current discussion.

You can also call it the “knight’s move”, after the hopping and sideways move the knight makes in chess, starting on one colour and ending up on another. This person could be the enthusiastic extravert, the seeker of shiny objects, the early adopter or just plain incapable of following what is being discussed.

Action You Can Take

Knowing the different types of topic leakage sharpens your awareness of the process, so that you recognise the danger signs immediately and have a response that prevents the meeting from being derailed.

Identifying this concept emphasises the importance of structure to a meeting, particularly objectives. A clear statement of purpose and output at the start of the meeting enables participants to keep contribution relevant and avoid topic leakage.

Mike Westwood has worked as a pioneering facilitator for over thirty years.  He has guided organisations to significant achievements with strategic plans, project reviews, company mergers, BPR, public consultations and major company rescues. His clients include a number of FTSE 100 companies, twenty local authorities and central government.  His experience includes Europe, the Middle East, the Far East, Africa and the US.  Further details of Mike’s approach, and how to contact him, are available to you on www.mikewestwood.eu

It’s January, 2021 Normally it’s a time for dreaming dreams and setting goals. This year however there doesn’t seem the usual urgency. Last February I thought the worst of the Covid crisis might be over by summer. Then, perhaps Autumn. OK, well at least it’ll be over by Christmas. No, No and No. Here we […]